The Jewels of Kindonan—mystical, magical gems that, in the hands of the mysterious little man, Hegarty, cause time traveling mischief and mayhem. Enter the world of 17th century Scotland with two modern heroines as they fight for their very survival against forces they could never have imagined, and as each finds a love to last all time.

In the World of The Jewels of Time: 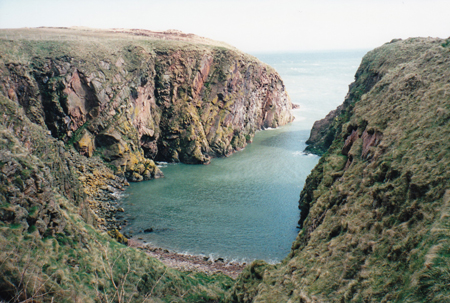 The rugged coast near Slains Castle

Several years ago, my husband and I traveled to that beautiful, rugged coast. The kids were spending spring break with their grandparents and we had the week to ourselves. “Let’s go somewhere fun,” my husband said. I’m sure he was thinking beaches and golf (after all, it was March), but when I replied, “Scotland!” he said okay. Gotta love that man.

We flew into Edinburgh, rented a car, and headed up the coast, hitting castle ruin after castle ruin as we went. Every ruin was different, each fascinating in its own way. Amazingly, the temperatures were mild. Not so surprisingly, the tourists were non-existent. Everyone else had headed south to the beaches. Go figure.

In St. Andrews Castle we found an intriguing mine and counter-mine dug during the siege of 1546-47 when the castle’s defenders attempted to forestall an attempted underground invasion. Also at St. Andrews we discovered a wonderful example of a bottle dungeon -- a pit dug deep in the rock in the shape of a bottle. Prisoners were tossed down the narrow neck and into the airless pit below. Only a rope thrown down would get them out again. This became the inspiration for a scene in Amethyst Destiny. 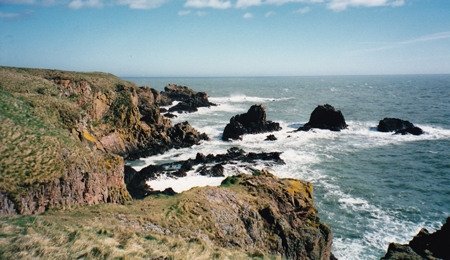 The coast near Slains Castle/Castle Stour 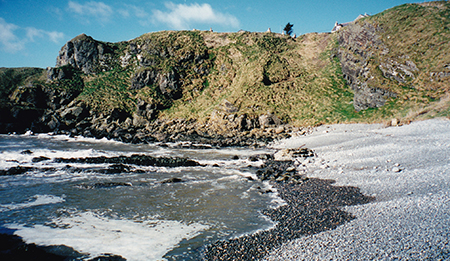 Where Rourke and Brenna came ashore

From St. Andrews were drove up the northeast coast and toured the stunning ruins of Dunnottar Castle, built on a rocky precipice all but surrounded by the sea, then on to the quaint seaside village of Stonehaven, the inspiration for the town of Dunhaven in Sapphire Dream.

The next day, we visited Cruden Bay and the ruins of Slains Castle. Bram Stoker is said to have used it as his inspiration as he wrote his story of Dracula. While Slains Castle itself bears no resemblance to Castle Stour, the coastline along this stretch was my inspiration for Stour’s location. 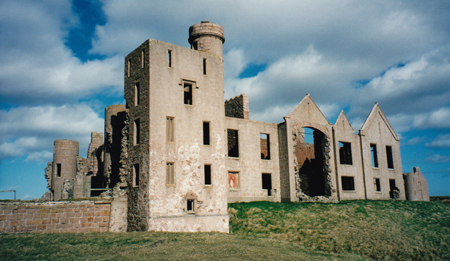 The ruins of Slains Castle in Northeast Scotland 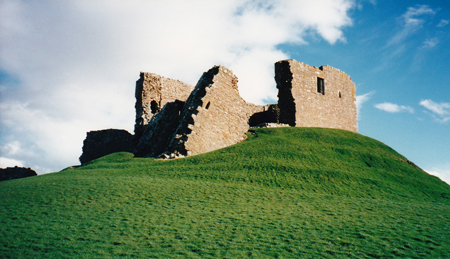 From there we headed inland, touring Huntly and Duffus castles. While Huntly is a far better preserved stronghold, I found Duffus more intriguing, mostly because part of it broke away and slid down the motte (the hill upon which the castle had been built) at some point in the past.

We ended our week in Inverness with excursions that included the Culloden Battlefield and a visit to one of my favorite spots in the world -- Urquhart Castle on Loch Ness.