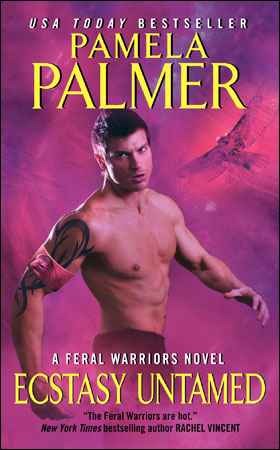 Shattered by recent nightmarish events, Hawke feels his bond with his animal spirit weakening—and once it breaks, he’s finished. The arrival of Faith sends his life spinning even further out of control, for although she delights him and enflames his deepest primal passions, she’s promised to Maxim, the newest Feral Warrior.

Faith is drawn to Hawke from the start, but Maxim holds her in his thrall and has secretly bent her to his malevolent will. Though gravely damaged, Hawke is the only one who can end Faith’s slavery and protect the Feral Warriors from Maxim’s evil designs. But first they both must embrace the wild…and surrender body and soul to a forbidden, all-consuming ecstasy. 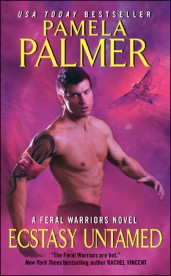 White-hot rage glowed, burning away his mind until only banked coals remained, coals ready to erupt into flame at the slightest stir of thought, of consciousness. His own yell rang out, silent and horrible in this suffocating dark, pounding at the insides of the skull he’d long since ceased to feel.

A perfect blackness had become his only reality, devoid of sound, touch, taste, smell. Devoid of life. His only awareness, the screaming rage, the endless fury.

From far away, a voice whispered, an echo of another time, another place, tormenting him with memories of what he’d lost. Memories of life, of light, of freedom. Of the Feral brothers he longed to rejoin and knew he’d never see again. His friends. Shape-shifters. Immortals. Though that was a lie, wasn’t it? Immortal meant ‘unable to die’ and he was certainly not that. None of them were. Quick to heal, incapable of aging, yes. But unable to die? No creature was that.

And his own death stalked him now. The moment he’d realized he’d fallen into a Daemon spirit trap he’d known all was lost. The animal spirit that had long ago marked him to be one of the Feral Warriors, one of the last nine shape-shifters that remained in the world, was being torn from him. And a Feral, once marked, couldn’t live without his animal. Within days, he himself would be dead. Worse…much worse…the animal spirit, too, would be destroyed. Or trapped for eternity where it was as good as dead, unable to mark another.

The Nine would become eight. No, not eight. He and Tighe had fallen into this trap together.

Seven. Seven Feral Warriors to stop the Daemons from once more rising and destroying the world.

The voice sounded closer now, no longer quite a whisper, yet indistinct, melding with others. As if they’d come to say good-bye. Or perhaps not good-bye. Perhaps the spirits of the seventeen Feral Warriors who’d been lost in this trap centuries ago had come to welcome him into their brotherhood. The brotherhood of the dead.

His soul shriveled at the prospect of spending eternity in this ceaseless dark.

Behind his thoughts the animal within him screeched his fury, blending with the rising insistence of the voices. For a time, he’d thought the hawk spirit had left him, but he was back, raging with anger.

“Hawke.” A voice broke through, his name slicing through the banshees in his mind. Kougar’s voice. If he were able to feel his pulse, it would be racing. The blood would be pounding in his ears.

Was he hallucinating, now? Kougar sounded blessedly near. 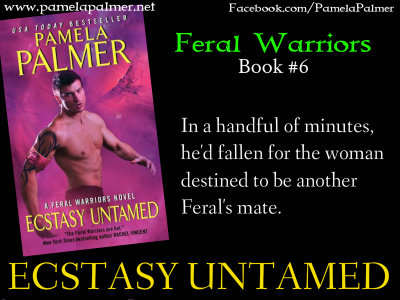 “If you are a fan of the Feral Warriors series, then you will love this new book.”

“Fangtastic!!! One of the best reads you’ll have all year.”

“…gripping, entertaining and a thrill ride from beginning to end. This is a must read.”

“This book breaks all the rules and breathes new passion, danger, and intrigue into one of paranormal romance’s best series.”

“Every time I pick up one of these novels I think that Pamela Palmer can’t possibly top my delight in the last book, but she does! This book will provoke tears, laughter and smiles as Faith and Hawke battle to save each other from evil and find a way to overcome the obstacles in their path to love.” Top Pick!