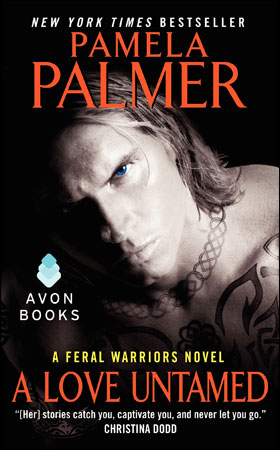 The newest member of the elite Feral Warriors brotherhood, Fox is eager to prove himself on the frontlines of battle against the Daemons. When paired with the legendary Ilina warrior, Melisande, he expects the fierce beauty to quickly fall under the spell of his quite considerable charm. Instead, he finds himself spellbound by a woman who’s his match in every way.

Beneath Melisande’s brittle exterior lies centuries of pain and a violent hatred of all shape-shifters—a hatred that slowly crumbles after they’re caught in a deadly and cunning Mage trap and she glimpses a surprising depth in her far-too-seductive partner. Their survival demands unconditional trust—and their salvation surrender to a wild, untamed love.

Kieran twisted, avoiding the male’s kick, then swung out with his own, slamming his opponent to the hardwood floor.

“Good, try!” Kieran said, holding his hand out to the male and helping him up. “Again.”

The male groaned but nodded, shoving a sweaty lock of hair out of his eyes. The gym, on the outskirts of Dublin, was not STET air-conditioned and hot despite the late-spring temperatures outside, smelling of sweat and hard work. Inside, more than forty new recruits sparred.

As the two men circled, Kieran called to the larger group, “Watch your opponent’s hands. Always know where they are. Hands are a Mage’s most dangerous weapons.” He didn’t have to add that a Mage could enthrall a Therian with a single touch, rendering him a puppet to be turned on his fellows. Or to be captured or killed. The Therians had been at war with the Mage for millennia and his recruits knew it all too well.

Fortunately, Therians had the advantage of muscle mass few Mage possessed. Once they’d had far more advantage than that. At one time, all Therians had been shape-shifters, able to shift into their animals at will. But those days ended five millennia ago when, for a brief period of time, the Mage and Therians banded together, mortgaging the bulk of their power to defeat the Daemons, who were terrorizing the Earth. They’d succeeded. The Daemons had been locked in a mystical blade from which they’d never escaped. But the power the two races had mortgaged never returned. When the dust had settled, only one Therian of each of the animal lines had retained the power of his or her animal, and the ability to shift. Those few had banded together, the strongest and finest of the race, and become known as the Feral Warriors.

The rest of the Therians, Kieran included, shifted only in their dreams, fighting their enemies the human way. With their fists and knives.

His opponent leaped at him, too high, and Kieran easily flipped him over his shoulder. “Keep your center of gravity low, boyo. Try it again.”

The male looked thirty but could be anywhere from twenty-five to a thousand or more, as all immortals ceased to age once they were fully grown. The man hunched over for a moment, catching his breath. “Any word on the new fox?” 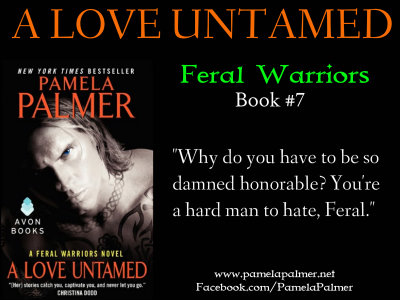 “…this tale combines a moving love story between a persistent man and the wary object of his affection with a quest that requires its seekers to intuit traps and puzzles worthy of cinematic interpretation. All who value good storytelling should not miss this one!”

“The Feral Warriors are one of my favorite shifter groups and Palmer continues to keep me enthralled with this series. These guys are so hot and when they love, they go in all the way. So keep writing Ms. Palmer and we will keep reading!”

“A Love Untamed is a sure pleaser for fans of this fantastic and exciting series. Surprises and shocks, twists and turns, lows so dark they were a torment to read and highs so lofty they made me dizzy, all pepper the novel making it a true page flipper.” 5 Stars!

“The action never stops as Melisande and Fox fall in love. Romance is done right in A Love Untamed for Ms. Palmer knows there is no taming Love! The sparks between these two are electric!” A Joyfully Reviewed Recommended Read

“This 7th installment in the Feral Warriors series is a memorable gauntlet of past sins and their devastating consequences, studded with gentle humor and acceptance, and culminating in a powerful bond and the redemption of one of the most unlikely heroines of the series. A Love Untamed is a GraveTells Recommended Read!”