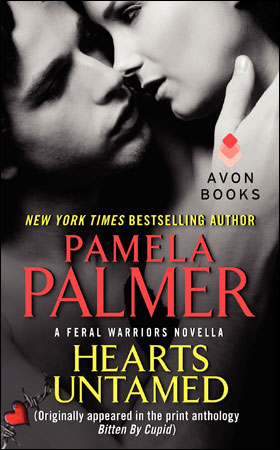 Book 3.5 in The Feral Warriors Series

Ten years after he spurned Julianne‘s declaration of love and then vanished, Zee‘s back—only this time he’s the one being rejected. Julianne’s in desperate straits, and involving Zee could jeopardize his immortality. But he won’t take no for an answer—and Julianne’s about to discover that her former love is even wilder than she thought…

Hearts Untamed, re-released as a stand-alone novella, was originally released as Pamela’s Feral Warrior novella in the anthology Bitten by Cupid. 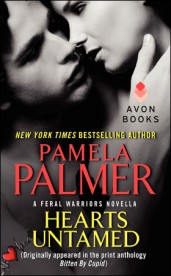 Zeeland had not changed at all.

Julianne stilled halfway down the stairs, her hand gripping the wooden railing until her knuckles turned white. He was even more handsome than she remembered, his short dark hair framing a classic face that could be as still as an evening lake or, as now, charmingly expressive as he returned the greetings of the Therians gathered around him.

His shoulders were broad beneath the navy blazer and striped dress shirt, his waist trim, his legs long as he stood among the tallest of the men in the room.

As she watched, he looked up. As if feeling her gaze on him, he turned unerringly toward her.

His dark brown eyes zeroed in on her. His gaze locked onto hers, grabbing hold and burrowing deep. Warmth and affection softened the lines of his face as he stared at her, dashing any hope that he might ignore her, or that he’d maybe even forgotten her.

Love for him rushed up inside her, tearing down her carefully built defenses, nearly overwhelming her with a need to race down the stairs and into his arms as she used to do as a child. But she couldn’t give in to the need. Not this time.

If his anger with her was gone, as it seemed to be, she was the one who would have to force the distance between them. The last thing she could afford was for him to get too close. To see too much.

She was going to have to pretend he no longer meant anything to her. Even if it was the greatest lie ever told.

Julianne tore her gaze from Zeeland’s, focusing on herself, on the pounding of her heart, and on the need to get her feet moving down the stairs even though part of her longed to turn and flee back to her room.

Out of the corner of her eye, she saw him start forward. Toward her.

Her pulse careened, her breathing turned shallow and erratic.

Clearly there would be no delaying this reunion.

She pulled her mask of friendly indifference tight around her and held on fast.

Zeeland started toward her. As she’d stood on the stair, as still as a statue, her brilliant turquoise gaze had met his, not with pleasure and welcome, but with a wary guardedness. Something clenched deep inside him, twisting until it hurt.

Where was his Julianne, his Sunshine? Where was the bright-eyed sprite who’d always flown into his arms with a glad cry whenever he returned?

The woman who descended the stairs was a stranger, her back ramrod straight, her steps measured and controlled.

Too controlled. He hadn’t seen her in ten years, not since before she’d come of age. Yet even from here he could see the stiffness in her step.

He pushed past his friends without a word of apology, drawn to her by the same invisible force that had drawn him to her from the day she’d arrived at the house twenty-one years ago. As if he’d always known her. As if she’d always been a part of him.

Why had he stayed away so long?

For ten years, she’d haunted him, her soft beauty stealing into his thoughts at the most inopportune times. For a decade, the memories of her smile and her laughter had remained tucked like precious gems deep inside his heart.

Where was that smile now? That laughter?

He’d run into Ryland in London yesterday and asked about her, as he always did. He’d asked if her music still rang through the house at all hours. Ryland’s off-hand comment that she’d developed a sudden fondness for Beethoven had sent his heart plummeting and a hundred warning bells ringing in his head.

Ryland hadn’t seemed to understand the significance of Beethoven. Zeeland doubted anyone but he ever had. If Julianne was playing Beethoven, something was wrong. Seriously wrong.

He’d wrapped up his business in London and gotten on the next flight to D.C.

She smiled at him, but the smile was a pale imitation of a Julianne smile and didn’t reach her eyes. Her gaze almost connected with his, but not quite. As if she focused not on his eyes but his cheek.

Goddess, but she was beautiful. Her skin creamy perfection, her nose small and straight, her eyes a brilliant turquoise framed by long, dark lashes.

Her scent wrapped around him, a sweet scent that had always reminded him of honeysuckle in the rain. A scent that had haunted his dreams and now wove itself into the very fabric of his flesh, into every drop of his blood, heating him. Hardening him.

Coming back was a mistake.

“Hello, Zeeland. Welcome back.” She said the right words, even injecting an appropriate level of warmth into them, but the words fell flat on his ears. They were lies. An act. She wasn’t glad he was here at all.

He felt as if she’d plunged a knife through his chest. But what had he expected? That he could return whenever he wanted and she’d be happy to see him?

Instead she was treating him like a stranger. Was she punishing him for staying away so long? For never once calling her? Never writing?

Ah, shit. He’d hurt her. Of course he had. Why hadn’t he ever considered what it would do to her when he’d left so abruptly? Right after she’d offered him her virginity.

“Julianne.” He clenched his hands into fists to keep from reaching for her, because that part of him that had always been tuned to her sensed she was on the verge of bolting. “I’m sorry.”

Her smile faltered. “For what?” Genuine confusion lit her eyes. She didn’t seem to know.

He studied her, looking past the beauty his eyes had craved, seeing the smudge of dark circles under her eyes and the paleness beneath the flush staining her cheeks. Beneath the pretense of calm, he sensed tightly-controlled emotion, though was that emotion was, he couldn’t tell. It was more than simple anger. Much more. His instincts sensed...fear.

Dammit. How long had she been like this? Why had no one told him? Could no one else see it?

Why had he stayed away so long?

“I hear you’ve been playing Beethoven again,” he said softly.

Her gaze jerked fully to his, her eyes flaring open, her ripe mouth widening with dismay. Need slammed into him hard, tightening his body and squeezing his heart. A need to sweep her into his arms and hold her close. To protect her as he’d done since she was nine. A need to taste that sweet mouth and to make love to her as she’d begged him to that fateful night ten years ago.

She wrenched back control, her gaze falling to his cheek. “It’s just music,” she said defensively.

“You know you can tell me anything, Sunshine,” he said quietly. The desire to touch her was almost a physical ache centered right in the middle of his chest. A desire that was so much more than physical.

She smiled that painfully false smile. “Thanks, Zeeland. I appreciate that, but I’m fine. Really. It’s nice to have you back.” She sidestepped him, dismissing him.

He shoved his hands in his pockets to keep from grabbing her arm and keep her from escaping. This wasn’t the time, nor the place. They had an audience, he realized belatedly. The whole damned enclave was watching them with sharp interest. Julianne was hardly going to confide anything to him here.

But sooner or later, she was going to tell him everything. That was a promise he made them both.

Bitten by Cupid hit #14 on the New York Timesbestseller list and #103 on the USA Today list! (posted January 2010)

People often ask me where I get my ideas and most of the time I can't answer, because I really don't know. As long as they keep coming, I don't question or complain. But every now and then I know exactly where an idea came from.

In the novella Hearts Untamed, there's a book with a hidden pocket in the front cover. I won't tell you the significance of the book. If you've read the story, you already know and if you haven't I don't want to give anything away. What I will say is that pocket didn't come from my imagination. My parents own a book with one just like it. In fact, it was that book that gave me the idea. I've included a couple of pictures, though the pocket is hard to capture on film. The slit is down the entire outer edge of the front cover and not obvious to the eye. In the picture, a small sheet of paper has been slipped inside, leaving the portion you see sticking out.

When I first discovered that pocket when I was in high school, I showed my dad, who hadn't realized it was there. We decided it was a shame no one had left something inside for us to find, so we put a one dollar bill in it for the next person to discover. But I never forgot about it. And though the book in Hearts Untamed is not Three Years of Arctic Service, the pocket gave me the idea I needed for my story.

“Bitten by Cupid offers a great escape from the post holiday blues. You will surely enjoy your time reading this collection.”

“An entertaining twist on the romantic Valentine’s Day theme with glimpses of the fascinating paranormal societies each author has created. Each sensual story stands alone yet hones the appetite for more.”

“This is a slightly dark yet fascinating trio of Valentine stories. Though quite entertaining on their own, these tales are even more enjoyable if you’re familiar with the authors’ previous works.”

“A lusciously lip smacking dessert for Valentine’s Day. Readers will delight in all three stories equally.”