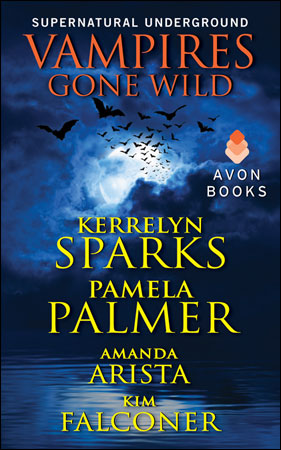 The vampires have gone wild in this collection of never-before-published stories by bestselling authors Kerrelyn Sparks and Pamela Palmer, and two rising stars of paranormal romance!

In A Forever Love by Pamela Palmer, Lukas has been trapped in Vamp City, unable to return to the beauty who stole his heart. But now that Elizabeth has stumbled into his world, it will take every ounce of cunning he possesses to keep her alive. 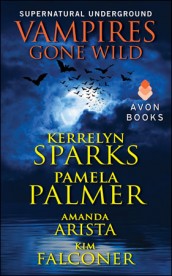 The hoofbeats of another horse caught her attention.

“Hold!” The voice, not the youth’s, called from a short distance. A voice that sounded wonderfully, achingly familiar, as if she’d conjured it up in this desperate moment.

A tiny flare of hope had her head snapping up as the fourth horse and horseman approached, deep in the twilight shadows. All she could make out was a form big enough and broad-shouldered enough to be Lukas’s. As he drew closer, she could tell the hair was a little longer, in need of a haircut. Logic told her it wasn’t him, it couldn’t be. Her agitated mind was merely attempting to overlay his image on the male who approached, the image of a savior. A hero.

But as he drew closer and she finally saw the strong jaw and high cheekbones of the face that had haunted her for two years, her knees gave way.

How was this possible?

He was dressed in a black shirt and tan pants, the same as the other pair, two swords strapped to his back, their hilts rising from behind his shoulders like wings.

The man she loved pulled his horse to a stop beside the male with the pierced face and stared at her with an expression she’d never seen, his mouth hard, his eyes at once cool as frost and angry as hell.

Her heart began to shatter.

“I’ve been searching for you, Elizabeth,” he snapped.

Her eyes narrowed with confusion. “What? Here?”

“No way,” the male as her back exclaimed, tightening his hold on her until she cried out with the pain shooting through her chest and shoulders. “You’re not claiming her, Lukas. She came in on the sunbeam, and don’t try to deny it—she’s got Starbucks. She didn’t get that in Vamp City.”

“She was my slave in the real world,” Lukas said smoothly. Slave? “I expected her to find her way to me before this.”

“She knows my name, doesn’t she?” His expression was so hard. Cold blue eyes pinned her. “Are you mine?”

She stared at him, her heart thundering. Yes, she’d been his. The old Lukas’s. She did not know this man.

“You left me.” The words came out unbidden, as raw as the pain in her heart.

For a swift second, she thought she saw that pain mirrored in his eyes, but a moment later he stared at her once more through hard, blue crystals.

This was not the man she knew. Yet at the very first sight of him, her heart had begun, very slowly, to unfurl, to blossom, and it continued to do so. Her heart was an idiot.

“I saw her first,” the pierced male grumbled. “I should at least get a taste of her.”

Lukas swung down off of his horse far slower than the bearded man had, his movements deliberate, threatening. And she didn’t think the show was for her.

“Release her.” Lukas’s gaze pinned the man at her back. “No one touches what is mine.”

In the blink of an eye, the arm across her shoulders disappeared. In the blink of another, Lukas was beside her, his hand gripping her upper arm. Too fast. Either she was suffering some kind of head trauma or they were moving too damned fast.

Her head felt suddenly full of helium and she began to sway. Lukas swept her up as if she weighed nothing, and she grabbed at her purse as it slipped off her shoulder. He strode to his horse, deposited her onto its back, and swung up behind her.

As his arm slipped around her waist, as he pulled her back against the chest she’d once loved so much, she finally found herself in the one place she’d longed to be for two years. Once more in Lukas’s arms.

But instead of the joyous reunion she’d imagined, she was shaking with shock. And fear. Lukas Olsson was not the man she’d thought he was.

She wasn’t certain he was a man at all.

“…an exciting addition to [Pamela’s] Vamp City series, [A Forever Love is] the touching story about an abiding love that is strong enough to survive the toughest of obstacles.”

“I highly recommend A FOREVER LOVE, book two in the anthology VAMPIRES GONE WILD, to anyone who has read A BLOOD SEDUCTION, a Vamp City novel, or anyone who hasn’t been brave enough to read it but wants to know what it’s all about. A FOREVER LOVE is gritty and dark, yet reinforces the belief that love transcends even the toughest barriers. Pamela Palmer never ceases to amaze me with her Vamp City world.”